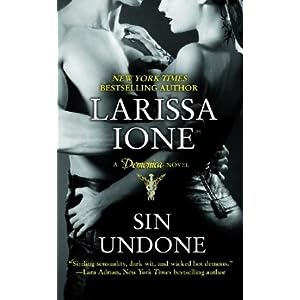 How I got the book: I bought the book

Summary: HER TOUCH IS DEADLY
As the only female Seminus demon ever born, master assassin Sinead Donnelly is used to being treated like an outcast. She spent decades enslaved, and now vows she’ll die before she’ll relinquish her freedom again. Then Sin’s innate ability to kill her enemies goes awry: She creates a lethal new werewolf virus that sparks a firestorm of panic and violence.
HIS HUNGER CAN’T BE DENIED
Half-werewolf, half-vampire Conall Dearghul is charged with bringing in Sin to face punishment for the plague. And she’s no stranger: He’s bound to her by blood, and the one sexual encounter they shared has left him hungering for her raw sensuality. Worse, Sin is the underworld’s most wanted and Con soon learns he’s the only one who can help her . . . and that saving her life might mean sacrificing his own.

The Good
What can I say, it’s Larissa Ione. You know you are going to get a gritty, intense, emotional, life and death rough love story. That is exactly what Sin Undone is. This is book number 5 in the Demonica Series and follows Sin or Sinead through her journey with Con (Connell). Sin and Con are thrust together because of a worldwide epidemic.Together they may be able to find a cure but first they have to get over being enemies.

After reading the first 4 books, I was happy to jump back into the world of otherworldly creatures Ms. Ione has created. From all the different demons, ware-people (is that a word?), vampires and combinations of each type, it felt familiar and comforting, like hot chocolate and a binky while house hunters plays on tv. It’s like “Oh so how is Shade and Runa, those kids must be driving them crazy” (Book #2) and it’s like, “Selena, what is up with Wraith, that cutie pie” (Book #3).

The story moves fast so you don’t get bored. The situations are loaded one upon the other and as you go on, you wonder how in the world is this going to be ok.

The sex scenes are hot and explicit so if that makes you blush, be warned.

The Not So Good

Some situations seemed manufactured. I know, of course it is, it’s a book but still. I thought some of it was like..come on, really? Not terrible but noticable. Things seemed complicated at times. The rules and regulations of the world and the species are complicated as is anything, but I found my ADHD self having a had time keeping up. The complexities of the story had a large part to do with the ending which I though was a tad bit convenient.

I give Sin Undone 4 our of 5 stars because it is a really good read. I love the real-ness (I don’t think this is a word) of the writing and the characters. The story keeps you hooked and is very involved and interesting and the sex scenes are great. Recommended for people who like good stories who can take explicit sex scenes.